It’s a Long Way to the Truth

Last year the Gulf of Mexico was fouled by 265 million gallons of oil spilled from the Deepwater Horizon rig explosion and resulting failure of its owners, BP, to cap the leaking well. We are now coming up on the 1 year anniversary of that disaster and we all feel confident that everything is finally back to normal. Well, that’s what we hear, anyway.

But Cherri knows better. She lives there. She’s seen it firsthand. And she’s talked with other people who live there and see the ongoing problems every single day… Oil still washing up on shore. Dead marine and sea life by the thousands. Sick Gulf Coast residents. Tainted fisheries. It goes on and on. But we don’t see it from where we are. There is no mention of it on the news. None of our friends talk about it on Facebook. We have our own survival to think about – how to get the kids to school, is there a sale at Walmart this week, should I get the salmon or the steak for dinner tonight? We aren’t affected directly by the ongoing problems in the Gulf, so there’s no way we can appreciate what’s going on.

And that’s why Cherri walked. To help us understand and appreciate what the media and our government are unwilling to share.

So, I’ll ask again… Have you heard of Cherri? No, you haven’t. It took her an entire month, doing 20-30 miles every single day, stopping and speaking at schools and civic organizations, meeting with local politicians and posting her stories online for everyone to see. But we still haven’t heard about her. Why? Why is her story — the story of the people of the Gulf — not gaining national media attention? Are we afraid to face the reality of what’s going on down there? Are we not interested in how our fellow Americans are suffering? Are we not concerned with the future of one of the most vibrant ecosystems in the entire world? Or are we so used to being told what to think that we believe BP’s claims that they have made things right?

Look around on the internet. After you’ve weeded your way through the hype, after you’ve sorted through the conspiracy theorists, the doomsayers, the nut jobs… you’ll see that there are some very serious and very real problems in the Gulf and along the coast. And that’s why Cherri is walking. To share the real stories with America and the world. To separate the hysteria from the truth. How do I know? Because Cherri is my friend. And we’ve seen the devastation firsthand – together.

I believe this mother of six who walked 1200 miles to speak with the President of the United States about the situation in the Gulf not only because she is my friend, but because Cherri is a very unlikely candidate to be raising awareness about clean air and water. You see, Cherri is the wife of an oil worker. She is married to a man who is out of work because of last year’s oil spill. She is married to a man who worked in a very controversial and dangerous industry so he could provide for his family. Cherri knows what the conflict is. She knows both sides of this oily coin. And if anyone can be trusted to bring us the truth, Cherri can. Listen to what she has to say. Listen to the stories of the people she met along her journey. Cherri is bringing us the truth. And she does it not just for the Gulf, but for us all. 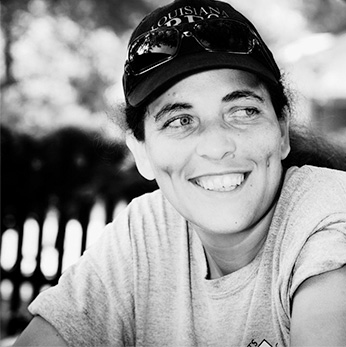